Here you can see everything that mistress has written together.

Mistress also knows crime thrillers. And in the Raisting crime series, I can also traipse through history.

It took quite a long time until I was able to convince my mistress that a good book is only if I walk through it. And that was confirmed right away, because she got the first good recession just because I am also in the story. Nice, right?

I think, mistress should listen to me more often.

With the Raisting crime series my mistress stopped writing such serious stuff. All the people who read this are laughing their heads off. So those who also have a sense of humor. But there are also people who want to tremble with fear when reading and those who don’t have a sense of humour don’t like it. But mistress always says that you can’t please everybody and she doesn’t want to, she wants to have fun with what she does and we have that, because sometimes, I help her with her writing. But that, you can read in my diaries.

Of course the people we kill in our crime novels are not real and the other people are not real either. You can’t write about real people. Not when they’re alive and not when they’re dead. But Mistress and I like to make people up. We’ve already made up lots of people together. It’s a lot of fun. Because if we use real people, then they could sue us and we don’t want that. Nevertheless it happens that people recognize themselves in the characters. We have been sued before because someone thought he was a fairy tale character. But the judge then explained that. And there is an artistic freedom. So nobody has to bother suing us again. Because if a book is well written, then you recognize yourself and others in some character and we can’t know every person in the whole world.

Short stories, as the name suggests, are short. They can be funny and serious. But funny short stories are more beautiful. And the most beautiful stories are those that life writes. And don’t you experience something really funny every day? Be it in the DIY store, where you run after the employees and they always flee from you, in the department store, in the club and even at home. At least that’s what mistress says. Every day is full of endlessly funny experiences. Sometimes we just don’t see them. Life is serious enough, says mistress. But my stories are the most beautiful. They are short and long. My diary entries are usually shorter and therefore they could be short stories, but all the volumes I have written together are anything but short. Which reminds me, I need a second bookshelf. Or a second one. So don’t take a long look into my mistress‘ short stories, but rather into my Rascal diaries. Of course you can read your mistress‘ stories as well. They’re just not as beautiful as mine. Yes, have a look. You’ll see! But then you can also write a message to your mistress that she should stop writing and concentrate on taking pictures of me and leave the computer to me. Then we will all have more of it. Because I need it more urgently! Is it a deal? Then I can write short and long stories for you, much more than before. And because a fan told me: „If the world isn’t nice to you and you read a Rascal diary, then the world is okay again“, then it makes much more sense if I sit at our computer and type for you, right? Mistress always just blocks everything! 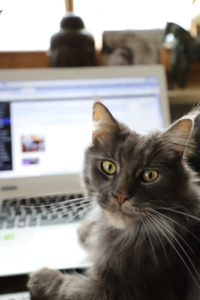